The idea for this project won the 2014 Equal Voice Journalism Fellowship, funded by the Marguerite Casey Foundation. The two-part series was published in English by Equal Voice News and written in Spanish for Hoy Chicago.

Part I: The Search for Affordable Housing in Chicago
By Tara García Mathewson 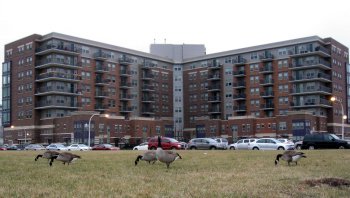 One wonders how it was even possible. Kids used to play ball in “Dead Man’s Field,” right in the middle of one of the poorest neighborhoods in Chicago, and look out at some of the most expensive real estate in the country. These kids could see extravagant condo buildings, but they were shut out of the world inside of them.

The post-World War II Cabrini-Green public housing project was an anomaly. Walking distance from the upscale Magnificent Mile shopping district, there was barely a buffer between the abject poverty of the projects and the incredible wealth of Chicago’s aristocracy. That’s why it has received so much attention.

Researchers, politicians, journalists — they have all flocked to the compelling narrative that surrounds Cabrini-Green. A child, shot walking hand in hand with his mother while heading to school. Two police officers, killed by a sniper. A mayor, who managed barely three weeks living in one of the high-rises hoping to prove it could be turned around.

“We was on the news so much we thought we were a reality show,” said Raymond Richard, who called the Cabrini-Green of the 1980s and 1990s a war zone. As a resident living south of Division Street, he fought with his neighbors against those living north of the aptly named “dividing line.”

Part II: Where Did Chicago Families From Cabrini-Green Go?
By Tara García Mathewson 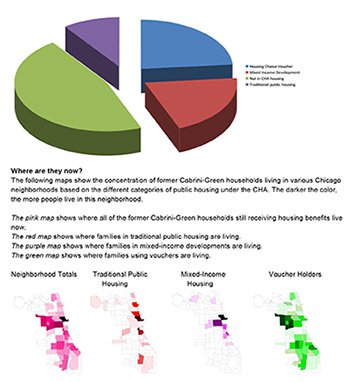 Annie Lloyd, 60, thinks living in Cabrini-Green ruined her life. She first stepped into Chicago’s Near North Side public housing project on July 7, 1977, with 4-, 3- and 2-year-old children. She thought she would be able to take advantage of the cheap rent and save money to take her kids to their own home. She left about 20 years later in the throes of drug addiction, her youngest son bragging about his gang affiliation.

Lloyd calls Cabrini-Green a trap. Low screening standards in the 1970s meant the mix of high-rise buildings and row houses were options of last resort for Chicago’s poorest and most vulnerable citizens. Many belonged to local gangs, often fighting one another across Division Street’s dividing line.

The drug trade within the projects was rampant, providing cash to young men and women who didn’t know how to use it and addiction to those unable to fight it. When Lloyd moved in, she didn’t know anyone. Then, she met a man. Then, she met his friends. Eventually, she said, she started to live like they lived.

“I got stuck on the drugs,” Lloyd said. “That was the worst thing that ever happened to me.”

Lloyd was happy to see the Cabrini-Green buildings go, demolished over the first decade of the 2000s as part of the redevelopment plan from the Chicago Housing Authority (CHA).

Robin Goins’ opinions could not be more different. Living in Cabrini-Green isn’t what she says ruined her life — it was leaving it.