Out of the gang, but still on the database
By Tara Garcia Mathewson 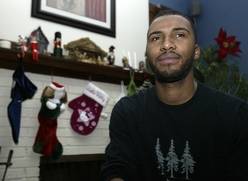 LeVan Blalark has had his name in a police department gang database for more than a decade, though he says he has never been in a gang. Photo by Steve Berczynski.

Every time LeVan Blalark gets into his car, he thinks about what might happen if he gets pulled over. For him, it’s never just a simple traffic stop.

Blalark, 33, grew up in Elgin for the most part, but also lived in Hanover Park, Schaumburg and Hoffman Estates.

He assumes some of the friends he made in high school got involved in gangs, though he says he never did. He suspects it was back then that he was entered into a police department gang database — an action that has affected every traffic stop he has had in the last 15 years.

“Every time I get pulled over they ask me if I’m still in a gang,” Blalark said. “My answer has always been the same: I’m not in a gang.”

Police departments across the state, whether they have dedicated gang units or not, keep a gang database or add names to a state roster.

No matter the system, individual departments help populate a broader state list available through LEADS — the Law Enforcement Agencies Data System. When an officer enters an individual’s name into LEADS during a traffic stop, for example, a whole host of information about that person’s criminal background shows up, including any presence on a gang roster.

Monique Bond, public information officer for the Illinois State Police, said that information can be used across state lines.

For Blalark, that means wherever he goes in the United States, he will have a reputation as a gang member to any police officer who runs his name.