Illinois Issues: How Uber And Lyft Are Catering To Communities Of Color
By Tara García Mathewson 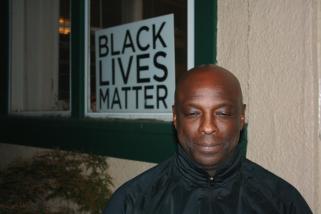 Derrick Milligan works in an office building at the corner of State and Superior in downtown Chicago. He is blocks from the Magnificent Mile shopping district, surrounded by commerce, bustle and activity. Chicago’s approximately 7,000 taxis flock to this area of the city, knowing they’re sure to find a fare. But Milligan tries to make sure he is never in a position where he needs to hail a cab.

As a dark-skinned black man, Milligan says hailing a cab on the street always presents a strong chance of humiliation. He has had cabs fly by with their service lights on and seen lights go off once he raises his hand, only to turn back on half a block away. He has watched cabs pass him by and then pick up someone else down the street. He has even had his fingers on the handle, ready to get into a cab when the doors lock and a driver lets someone else in on the other side.

A couple of years ago Milligan started taking Uber and occasionally Lyft. The ride-sharing companies, which let him request a ride through apps on his phone, remove the danger of being humiliated by drivers who refuse to let him in their cars.

Milligan lives in Rogers Park, on the north side of the city. In addition to getting rides to and from work appointments, he also uses the service to go to the airport or visit family and friends on the far south and west sides, where cab drivers often don’t want to go.

Click here to read the full story at NPR Illinois and listen to a radio segment about the story.